Einkorn's natural gluten is easier to digest, especially when fermented. Our Einkorn is an ancient grain from the dawn of agriculture.

All our einkorn seeds were collected in Europe by Rogos  and  grown by Klaas Martens.

Dehulled for human food. Not sold for seed.

All flour stoned-milled fresh the same day it's shipped!

Guidelines for Baking with Einkorn

Bake Paleolithic bread with hulls-on einkorn as an eductional experience. Click for recipe. 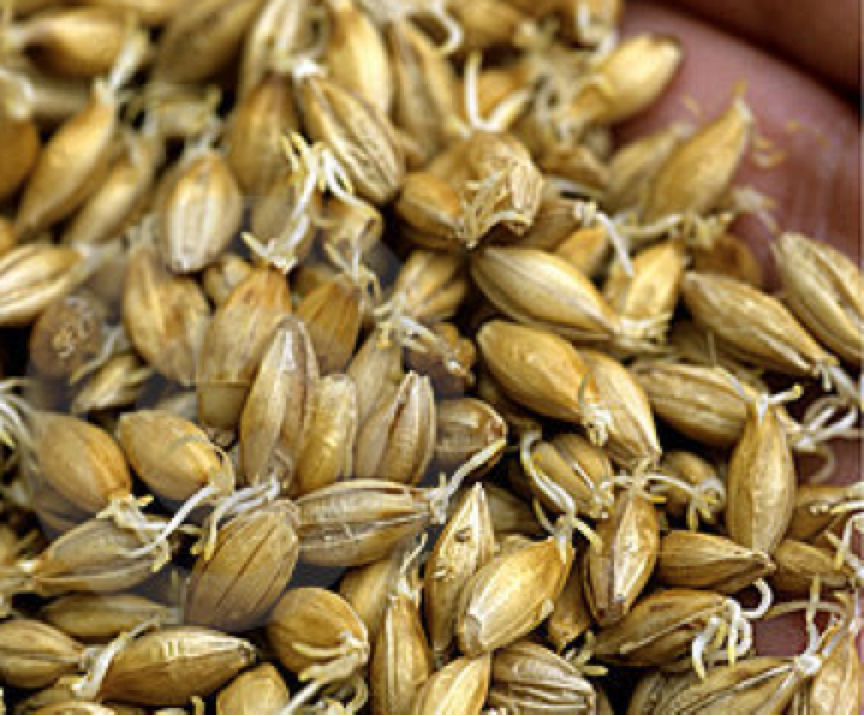 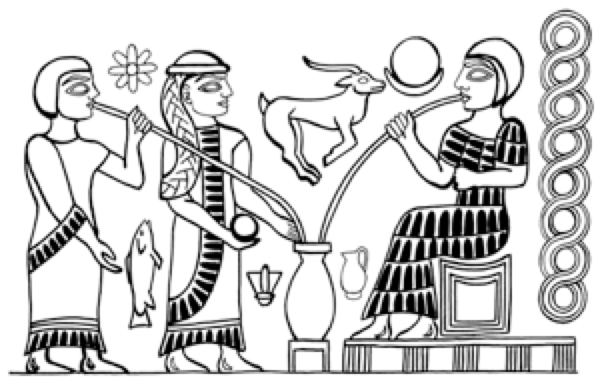 "We know God loves us because He gave us beer." Ben Franklin

Which came first - bread or beer? In the ancient Mesopotamian Epic of Gilgamesh, when the wild man Enkidu drank einkorn beer, ‘his heart grew light, his face glowed and he sang out with joy’. Ancient naturally brewed beers not only lightened the heart, but were brewed with healing herbs and even contained antibiotics.

How was ancient beer made?
Ancient peoples discovered 'beer' by tasting sprouted grain bread that had been left in water to ferment naturally. Gradually the art of producing beer evolved using sprouted grain bread boiled with dates or honey and fermentation. Later the bread stage was skipped, and the grain was soaked in water, sprouted, dried (malted), mixed with water sweetened with dates or honey and left to ferment naturally. Ancient ‘beer’, more like an unhopped ale or gruit, was a thin oatmeal-like porridge-brew with about a 3% alcohol by volume. You can recreate this ancient brew using the recipe for Einkorn KVASS above.

Brewing Basics: Sterilize all pots and bottles thoroughly. Simmer malt (ground dried sprouted hulled grain) in water for about half an hour (mashing) The sweet liquid tea-like ‘wort’ is then boiled and filtered for up to an hour. Herbs, spices, sugar, honey or maple syrup can be added to taste. The wort is rapidly cooled, then yeast is added. As the wort slowly ferments at room temperature, the sugars are converted to alcohol.

The Talmud (Pesachim 107a) describes four different types of beer; Shechar (grain beer), Pirzuma (date beer), T ’ainy (fig beer), and Asni (berry beer). Date beer was especially enjoyed in Babylon (Baba Batra 96b). Beer was used as a medicinal tonic to preserve herbal extracts in alcohol. Hops were added to balance the sweet malt with bitter astringency and as a preservative. Fermented herb beers, known as ‘gruit’ in Europe, were common in Ancient Israel. Even fermented milk, common in nomadic societies, was enjoyed. Cohanim priests who drank too much fermented milk were prohibited from serving in the Temple if they were inebriated (Talmud, Krisus 13b).

CANADIANS! Orders in medium flatrate boxed please add an additional $25. for shipping using the 'add to cart' button below:

All photos and text are copyright by Eli Rogosa, and may not be reproducted without written permission.

Baking with einkorn
History of Einkorn
The first wheat mentioned in the Bible in Genesis 30:14, in the account of Jacob's sojourn with Laban in Mesopotamia ­ was einkorn. Known as 'shippon' in Hebrew, Abraham and Sarah offered einkorn cakes to the three angels that visited them. Wild einkorn was harvested in the late Paleolithic and early Mesolithic Ages, 16,000-15,000 BC. Cultivated einkorn found in Karaca Dag-Mountains of Southeast Turkey. Einkorn was cultivated in the Tigris and Euphrates (modern day Turkey to Iraq) of ancient Mesopotamia to ancient Jericho from 7600 B.C. and gradually spread to Asia Minor and Europe. Einkorn has survived in remote village fields due to its great ability to draw nutrients from stony soils in mountain villages and rich flavor. Ancient peoples pounded the grain with morters to loosen the hull, then milled it into flour by hand-grinding between stones. Traditional peasants prepare einkorn porridge, peasant breads, mixed it in soups, salads and casaroles, and use it to feed animals evedn to this day in Turkey, Yugoslavia, Albania, Transylvania, and in the Andalusia, Spain. The ancient secretive tribe of Druze peoples, with an esoteric history spanning from Jethro, the father-in-law of Moses, still grow einkorn today in their villages in Syria and the Golan Heights for festive ceremonial meals.

Einkorn has an other-worldly feeling to it, perhaps due to its delicate, filagree glumes that rise up from the grain head. We are excited to report that our einkorn breads rise well, have good loaf volume and are delicous!
Nutrition
Einkorn is higher in protein and minerals than modern wheat. (Einkorn-22.83% vs. modern hard red wheat-14.5%) and higher in phosphorous, potassium, pyridoxine (B6), lutein and very high beta-carotene (lutein) and antioxidants.(2.)
Gluten Safety
We advise to work with your doctor to test if einkorn is safe for you. Every person is unique. A cautious way to test is to touch einkorn flour to your lips. Does it feel ok? If you feel no reaction, carefully place a tiny amount on your lip then tongue. Take slow, careful steps to test for yourself if you feel any reaction.

Ancient wheat builds bridges for peace. We collected einkorn from traditional Druze farmers in the Golan Heights in cooperation with the Palestinian <berc.ps>, the Jordanian and Israel Genebank. See Conference Proceedings and Report. We coordinate the 'Northeast Organic Wheat' project in partnership with the Hungarian Cereal Genebank, Agrocologia of Denmark, Dr. Mueller of <darzau.de>, Anson Mills, NOFA-NY and MOFGA. We are conducting trials at the University of Massachusetts Organic Research Farm, and on our 12 acre organic farm in Colrain in the Berkshire Mountains of Massachusetts, to trial world einkorn populations to evaluate which populations grow best in New England. We are testing for nutrition and tolerance by gluten sensitive celiacs, and local adaptability. We welcome research and grower cooperation.
Workshops

'Bread from the Earth' workshops offered on the history of wheat, artisan bread-baking with ancient and heritage wheats, with practical suppport to restore ancient grains in nutrient-dense cropping systems. See: growseed.org/education.html

Objective. The treatment of celiac disease is based on lifelong withdrawal of foods containing gluten. Unfortunately, compliance with a gluten-free diet is difficult mainly due to its low palatability. In evolutionary terms, Triticum monococcum is the most primitive cultivated wheat. Conclusions. Data show a lack of toxicity of T. monococcum gliadin in an in vitro organ culture system, suggesting new dietary opportunities for celiac patients to safely eat einkorn.

*All photos and text on this page are copyright by Eli Rogosa (unless otherwise indicated) and may not be used without written permission.